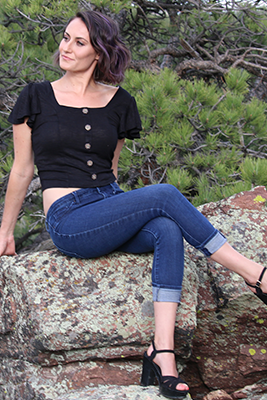 Layla began her athletic career at the age of five as a competitive speed swimmer.  She started competing in gymnastics and ice skating soon after that, and also found that she loved theater and dance.  She discovered synchronized swimming at the age of eight and was fascinated by the sport and how it combined so many things that she loved – movement, water, athleticism, performance, and music.  She decided to move from her hometown of Boulder, CO to Santa Clara, CA at the age of sixteen to pursue synchronized swimming at an elite level.  She qualified for the U.S. National Team at age nineteen, was a member of five U.S. national championship teams, and competed in international competitions all over the world.

Layla was recruited to participate in a workshop with the show Le Reve in Las Vegas in 2010.  She accepted and soon after was hired as an artist.  Le Reve opened Layla’s eyes to the world of high-level circus productions, and she was immediately hooked.  She went on to train as an artist for Cirque du Soleil in Montreal and joined the cast of ‘O’ in 2013.

Several years later, Layla decided to transition from performing as an artist to exploring other avenues in life. She finished her bachelor’s degree, then she began to choreograph and coach, work as an event planner, and study holistic health.  She is also a singer and songwriter and she loves to travel.  She wants to continue to develop her music, and she has been solo-traveling all over the world with the intent to learn more about other cultures, as well as study different mind-body practices such as yoga, qigong, meditation, and shamanism. Her vision is to bring these practices to as many people as possible to help others heal and transform their lives.

She also recently joined the C5 creative team and is honored to be able to work in the beautiful Aqua-theater on the Royal Caribbean cruise ships, alongside so many highly creative directors and artists.

Layla’s overall vision for life is to act as a conduit for others to experience something transformational, whether it is through performance art, music, or inward or outward travel.