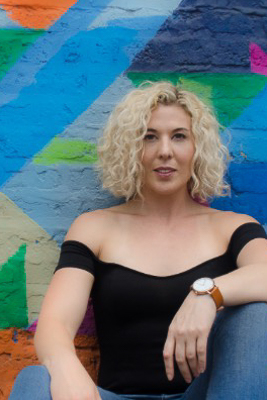 Sarah is a graduate of California Institute of the Arts, BFA in Acting. Awarded a fellowship in New Zealand, she studied the art of Bouffon under Tom McCrory, a principal student of Jacques Lecoqs, International Theatre School. She gained a profound understanding of gesture and movement through melodrama, human comedy, and tragedy. As a dancer she performed in Peach Blossom Fan, the debut play for the Roy and Edna Walt Disney Theater, REDCAT, under the direction of Zhou Long of the Beijing Opera.

Her interest in the discipline of dance and theater paired with her athletic and gymnastic ability led her to the study and performance of aerial acrobatics such as silk tissu and the lyra hoop. She has performed aerial arts with The Silk Sisters, Cirque Montage – Wonderworld Ent., Way2Much Ent., SupperClub, Andretti Family and other events all over the USA. Her dance and aerial choreography has been seen at CARNIVAL, The Choreographers Ball were she was approached and considered to be one of the choreographers for the movie “Go for it!” In Long Beach CA she envisioned and directed VOODOO, a rock & roll show with dance, song and cirque. Her work has been one of charity as well; she was proud to be the choreographer for the music video, Mr. Trooper, made to raise funds for the Iraq veterans and their families. With all her diverse experience under her belt Sarah’s recent endeavor has been the pairing of the theatrical with the aerial to create fresh pop culture experiences for audiences to behold. This led to the manifestation of her original flying apparatus “Paycheck” the Flying White Tiger. Currently, Anderson is proud to train the Aerial Arts for C5 create with no limits